Our mission is to promote responsible dog ownership through education, programming, and assistance. We do this four ways: through Humane Education, Outreach, Advocacy, and Shelter to Service.

The American Pit Bull Foundation was created to not simply rescue and take in pit bulls; we take in owners as well. We are just as much human advocates as we are canine advocates. Domestic dogs are dependents and to provide the best life for domesticated animals, we have to understand the role their human-counterparts play.

Responsibility and accountability are the backbone of our teachings.  It takes a community to solve community problems and we feel very strongly that it is the responsibility of the community as a whole to lend positive impact and influence on tackling the issues that we face together as a society. 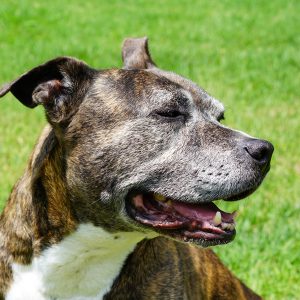 The American Pit Bull Foundation began as a resource for education to promote responsible dog ownership. Due to pit bull type dogs being the most abused, abandoned and neglected dogs overcrowding our shelters and being euthanized by the hundreds of thousands each year, we chose this population of misunderstood animals to represent our mission.

The work of APBF is funneled into four strategic categories: Humane Education, Outreach, Advocacy, and Shelter to Service. We believe that these programs in collaboration with the efforts of other animal welfare organizations, are critical in the advancement of our society as responsible dog owners and compassionate caretakers of sentient beings.

APBF does not believe in discrimination – of any sex, religion, non-religion, personal identification, background, race, economical status, OR SPECIES.

From Nana’s Rescue to The American Pit Bull Foundation

Just shy of 2010, the American Pit Bull Foundation (APBF) came to fruition from months of brainstorming, planning, and organizing thoughts.  The driving force behind the creation of APBF was to approach the problems of abuse, neglect, unnecessary euthanasia, abandonment, and overpopulation at the root of the issue and from a perspective that could help break the cycle that rescue groups were currently in. The cycle of simply taking in rescue after rescue as the numbers only increased, rather than making a dent in the rising number of dogs being euthanized because there simply aren’t enough homes for them all. APBF was designed to tackle the root of the problem, as opposed to continuously, and tirelessly, lopping off the head of the giant dandelion, only to have three more heads take its place.  The thought process was one initiated to help from the bottom up and not go bankrupt or suffer tremendous burnout and compassion fatigue in the process. The rearing of the organization was not a whim of an idea, rather a learned lesson from doing things the hard way first.

Sara Ondrako, the Founder of the American Pit Bull Foundation, worked as a veterinary nurse and routinely took in owner surrenders at the hospital whose owners could not afford, or simply did not want to provide, needed medical care for their pit bulls.  Though she occasionally took in other breeds she came to find that most of the dogs (overwhelmingly) that were being surrendered were pit bulls. Sara would spend her own money to medically treat these cases under the hospital physicians and then privately seek suitable homes to place them in.  During her time at an animal hospital she came to understand that when a case called for an Animal Control report, due to neglect or abuse, these cases primarily involved pit bull type dogs. Knowing that the county shelter did not adopt pit bulls at the time, the dogs that the hospital was trying to help were all essentially ending up euthanized.  Sara found this to be an exhausting factor and a double edged sword. Motivated by the conundrum she signed up to be a shelter “rescue” so that she would have access to the dogs that they had to report that were in abusive or neglectful situations. This would grant her the ability to pull dogs from the shelter and re-home them.

In 2005, a blind Pit Bull named Nana came into a Charlotte animal hospital.  She smelled of cedar shavings from her outdoor bedding and her owner wanted to have her euthanized as she was newly epileptic.  Though her condition was controllable with medication he did not want to be bothered with administration. He also did not want to surrender her because she, “wouldn’t be comfortable with anyone else aside from him”, he explained to the doctor as she was in the treatment room actively enjoying affection from the staff.  Though the doctor handling the case (who was a first year intern) didn’t have an impressive drive to try with this owner, no one could save Nana. No one could convince this owner that she could lead a happy life with another home if he didn’t want to bother with the medication. He simply didn’t care and his answer was no.  So, after the pit bull she couldn’t save, Ondrako registered her rescue name with the local animal shelter as Nana’s Rescue to honor Nana in saving the lives of others through the shelter.

In 2007, a mere two years later, Ondrako developed a pattern of taking in more animals than she could financially support and physically care for at any given time.  She would take the pregnant dogs because they were the first to get euthanized. She would take the sick dogs, the dogs that needed wound care, or those requiring medical attention.  They would stay in her home or with someone who agreed to foster and eventually she would find them good homes with a make-shift application process. Long hours, late nights, and heartbreak after heartbreak over the dogs she could not take in, or save from their condition, ensued.

Not long after this, the levy broke. The funds for day to day life were literally going to the dogs and her partner put his foot down as he was witnessing the breakdown of the family from rescue efforts taking over every other aspect of routine and normalcy.  The decision for rescuing to discontinue was made and Nana’s Rescue closed intake permanently. Ondrako moved on to a non-animal related occupation and tried to put animal welfare behind her. It didn’t last long.

Shortly after “retirement” Sara was recruited as a seat on the Board for the American Pet Cross, (APC); an organization directed towards animal welfare needs, (disaster relief, abandonment, abuse, and neglect) created by a friend, Dan Taylor.  Sara’s focus naturally steered towards pit bulls though the organization was geared towards all companion animals. Ondrako concentrated efforts on rehabilitating a community raised with dogfighting and worked on the End Dogfighting Project in collaboration with the Humane Society of the United States while with the APC. When the Founder of the American Pet Cross tragically passed away the organization collapsed as well.

Motivated by her friend who could no longer continue his own work, and determined that there was a better way to attack issues surrounding animal welfare, Sara conceptualized the basis for the American Pit Bull Foundation.

Aside from being a favorite class of dogs to the Founder, Sara knew that targeting pit bulls would aim to help one of the largest populations in need.  Her organization would focus on why so many pit bulls were abandoned, abused, neglected, and surrendered at animal control facilities, and would derive and implement solutions to those problems.  The organization would provide outreach and education and would assist those in need that were behind potential surrenders. Instead of taking on problematic dogs and allowing for owners to simply turn around and continue the same mistakes with another dog, this organization would start with the owner.  Find and understand the reason for such easy, (and not so easy) disposal of family pets. Teaching compassionate care and the value of companion animals. Focusing on solving those issues could in turn, and has since, decreased the number of dogs that are surrendered due to solvable issues and therefore decrease the number of adoptable dogs that are unnecessarily euthanized.

In 2010, the American Pit Bull Foundation officially came to life and was incorporated.  With the help of community partners and fellow volunteers that shared roles with other organizations the programs and ideologies fell into place almost seamlessly.  The Mission Statement was simplified to caption our intentions with “Promoting responsible breed ownership through education, programming, and assistance”. Combined with a detailed and specific purpose, the organization continues to live and thrive by way of its mission.

With a solid team, enthusiastic volunteers, and community support the organization continues in its successes and strives to maintain the ideals it was formed upon.  The goals set forth are implemented to have the greatest long term effects in animal welfare for Pit Bull type dogs and their owners.